This web is neither owned nor supported by the LEGO Group

My LEGO story began in middle 90's when I was 12 years old and on Christmas I got my very first LEGO set - red buggy LEGO Technic 8829. So I began building Technic directly because LEGO System seemed too primitive to me. As next Christmases were going my LEGO collection grew slowly but I was building only official models with help of building instructions except one propeller plane that I've created on my own. Building my own creations (MOC) were almost impossible for me that time. At the end of 90's my "dark age" (time when you stop devoting to LEGO ) came and closed the first chapter of this story. 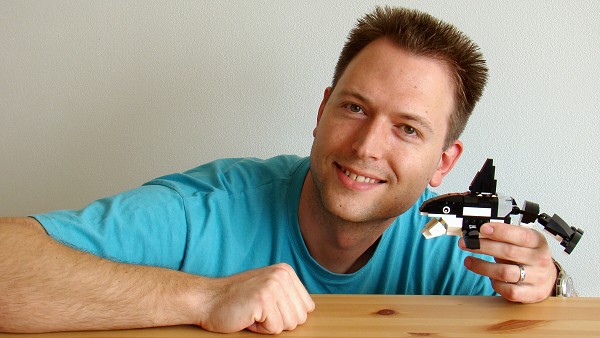 I came back to LEGO at the end of my university study. At that time first LEGO Digital Designer was released and virtual building captivated me so much that I had to go buying some real LEGO. I'm gonna disappoint those of you who expected that I bought LEGO Technic because I took a fancy to LEGO Creator. My first Creator set was amazing animal set 4884. At first I began building alternative models in accordance with pictures in building instructions and them my own alternates. I've built out of this set for example bee and rabbit and out of other Creator sets for example hot rod and several small cars.

Great turning point came in 2010. I found and bought red buggy LEGO Technic 8048 in shop because it reminded me my very first LEGO set. I liked this set very much just I was disappointed by alternative model - it was little bit strange tractor instead of motorbike in older set 8829. So I got idea if they built motorbike out of buggy in past I'm able to do it now too. And I did it. My first alternative model built out of LEGO Technic was done after few days of building. I found out that building out of new studless Technic is much easier and more entertaining than classic Technic. Soon I visited great AFOL (Adult Fan Of LEGO) LEGO exhibition in Roztoky near Prague where I found Czech AFOL community associated with forum kostky.org and amazing alternative models built by grohl. His work made my motivation for building more alternative models out of LEGO Technic and Creator sets stronger.

Next turning point arised in 2011 when I established website buildinst. Buildinst is my answer to everybody who is in same situation now as I was in my childhood. It was time when I began collecting LEGO and I wasn't able to build my own creations yet so I was looking for some source of building instructions for other models built out of sets I owned.

If you are asking why I build only alternative models, believe that answer is very simple. I like order and I want to have all my sets complete and not mixed up. So alternative models are only way for me how to build something my own. It is also good way for sharing my models with others because you need to own just one set to build my model.

Few years has passed since I wrote my LEGO story here and many things happened during this time. This is digest of the most important moments in extension of my LEGO story: When I collected enough LEGO sets and build enough my own creations I began regularly showing my models at AFOL exhibitions within Czech Republic. In 2014 I met Jan Beyer (LEGO comunity manager for Europe and Asia) in Prague and started working for him on different projects sponsored by The LEGO Group. In same year I advanced to the last round of recruitment for new designers in LEGO Creator team in Billund. I didn't succeed there but I don't give up... At the end of year 2015 I became enthused by programable sets LEGO WeDo and Mindstorms and I have even led courses in programming these sets for one year.